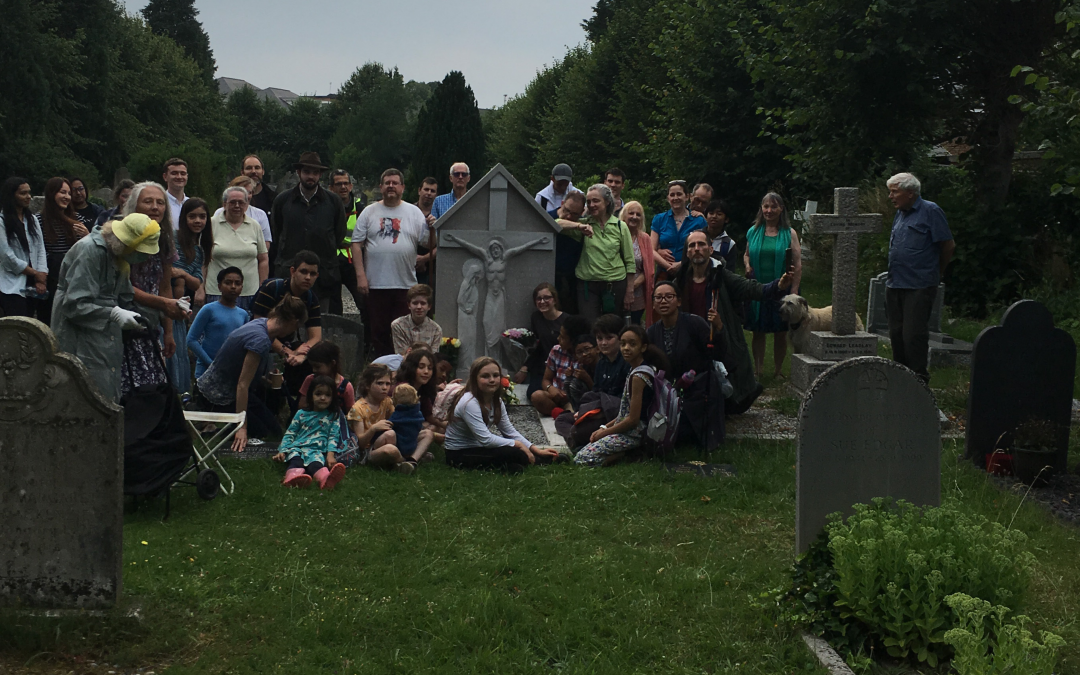 Bishop David has announced he will preach at the 12th annual GK Chesterton pilgrimage on Saturday 30th July 2022, the hundredth anniversary of GK Chesterton’s conversion.

GK Chesterton was an English writer, philosopher and theologian born in 1874. He lived in Beaconsfield, Buckinghamshire within our diocesan boundary, and is buried in a cemetery in the town. He is well known to many today as the author of ‘Father Brown’, recently bought to life in a TV series. He is recognised as contributing to the Christian conversion of C.S. Lewis, with Lewis referring to his book ‘The Everlasting Man’ as the “best popular apologetic I know”.

Each year many embark on a 27 mile walking pilgrimage, here is a report from the 2021 pilgrimage.

At 7:30am my fellow Pilgrim Peter read the famous paragraph (above) from Chesterton’s autobiography, and the five of us who were aiming to walk the full 27 miles said the GK Chesterton prayer and set off from the very St. George’s Anglican Church near Notting Hill.

Within a couple of minutes of setting off we were joined by a mother and daughter who would walk the first part of the 27 miles with us. And then another Pilgrim, Daniel, joined us and that made eight.

The weather forecast had been for thunderstorms. I mentioned this in prayer to GKC the night before, as walking 27 miles is hard enough without the weather to contend with! On the day, we actually had a little rain that bothered none of us, to the point that I was able to do the full twenty-seven miles in a t-shirt!

On the way we chatted about Chesterton, lockdowns, Chesterton, the Church, Chesterton, and we also prayed. Doris and Stefano joined us in Ealing. After we passed through Ealing, the route became much nicer, we walked along the canal heading for a pub in Cowley where we stopped for a swift drink.

Then we crossed the M25 and left the Diocese of Westminster behind us as we headed into Northampton. We all made it to the 2.30pm Mass in good time, having walked 21 miles at a good pace, some of those arriving by car seemed to have a bit more trouble!

Thanks to the Bridgettine Sisters for hosting us again this year. Mass was very kindly offered at the last minute by Fr Philomeno, after Fr Brett the original celebrant was unwell.

Next year will be the 100th Anniversary of GK Chesterton’s Reception into the Catholic Church, and after Mass I was very glad to be able to read out a message from Bishop David Oakley, the new Bishop of Northampton, to The Catholic GK Chesterton Society, in which he said,

The date of Saturday, 30th July 2022 is now firmly in the diary here, and I would be delighted to preach at the Mass.”

A few Pilgrims only came for Mass, but the rest of us, about 45 in total, set off across the beautiful countryside for the last 6 miles to Chesterton’s grave in Beaconsfield. The youngest walking pilgrim was about 3 years old and the eldest was no longer in their 60’s! We left flowers at the grave from us and also a bouquet for Frederica from Italy who is very ill. We prayed the Chesterton Prayer at the grave for Fr Brett, for Fr Finigan to be able to read again after a stroke, and we prayed for our own intentions as well as those sent in from all over the world. And then in the Chestertonian tradition we went to GKC’s local pub for much needed food and drink!

Whether you can walk all, some or none of the Pilgrimage (you can still attend the Mass, even if you can’t walk at all!) you are very welcome to join us next year on Saturday 30th July 2022, the 100th Anniversary of GK Chesterton’s Reception into the Catholic Church. See details here.