For A Synodal Church

A message from Bishop David

Synods are an ancient form of church gatherings, stretching back to the Acts of the Apostles.  Now Pope Francis is asking us to gather in the same way.  He has called a Synod in 2023 which will involve all of us.  As Pope Francis said at the worldwide launch:

“The Spirit asks us to listen to the questions, concerns and hopes of every Church, people and nation.  And to listen to the world, to the challenges and changes that it sets before us… Let us listen to one another.”

I am asking us all to get involved in our diocesan synod process.  This is not a parliamentary system in which there are winners and losers.  Instead, this is about graceful listening and graceful speaking, in which each person’s contribution is valued.  Each one of us has the opportunity to speak and be listened to; but also to seek out those who do not usually speak, and those whose voices are not usually heard.  The conversations we have together will inform the future direction of our diocese.

“The purpose of this Synod is not to produce more documents. Rather, it is intended to inspire people to dream about the Church we are called to be”

Over the next few weeks there will be all kinds of groups and conversations springing up around the diocese.  I ask as many of you as possible to take up these opportunities, both as participants and as local organisers.  We will need your eyes and ears to reach those on the margins, a particular concern of Pope Francis.  There will be resources and training to help make this happen

The Synod in Northampton Diocese

Our diocesan process has two strands: group conversations in parishes, schools and Catholic organisations, and individual conversations.  We want to reach as many people on the margins as possible.  To do this, we will need local listeners who can create a safe space for good conversations, and submit notes afterwards.

The first phase is the parish launch and information/training sessions.  Between now and Christmas is the local phase.  After Christmas, there will be a pastoral area phase and finally a pre-Synodal Assembly in February.  We look forward to receiving submissions from all over the diocese.  After a discernment process, this will form a report to go with all the other dioceses to form the basis of a national submission.  Finally there will be a gathering in Rome in October 2023 to bring together Bishops and representatives from around the world. 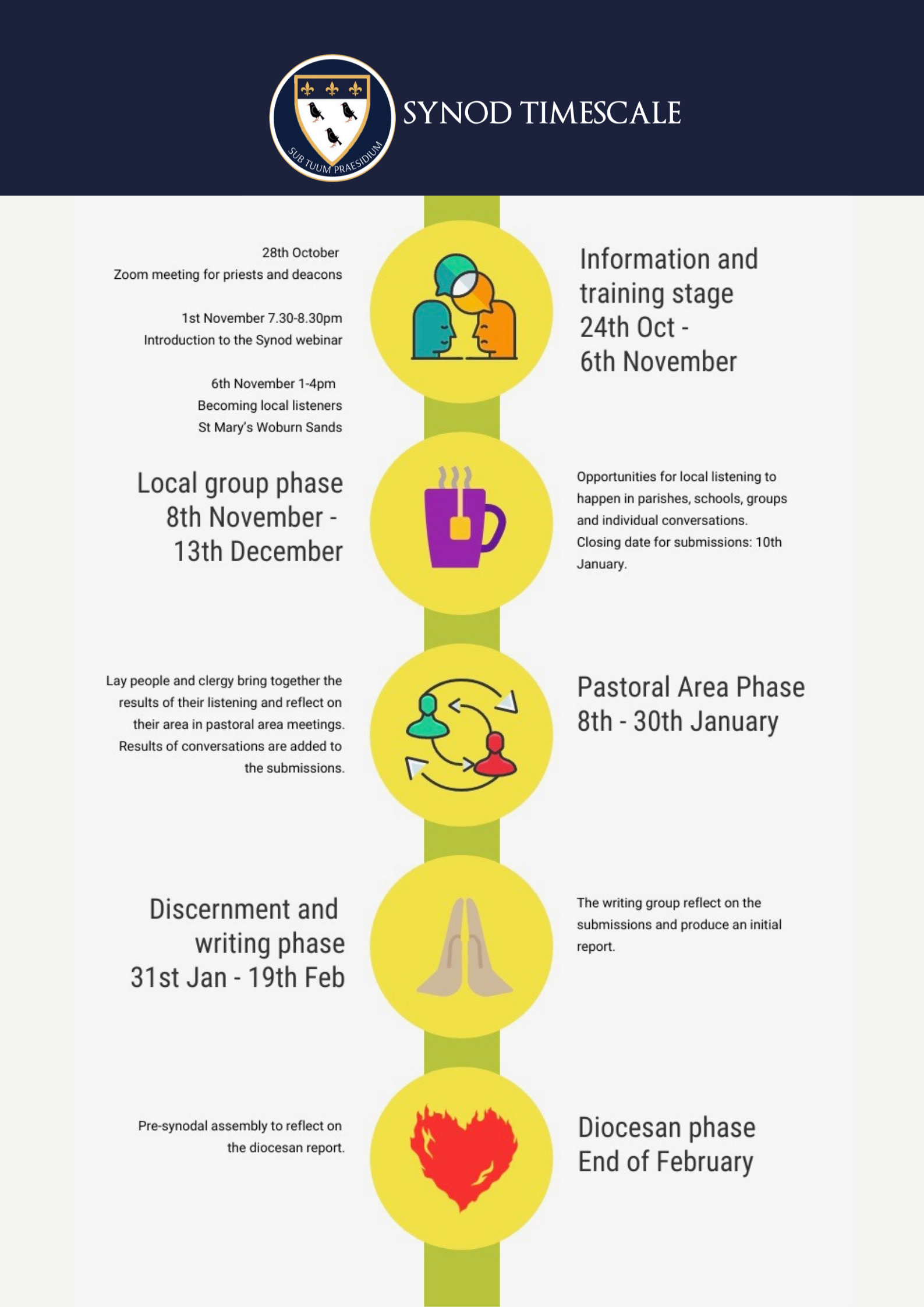