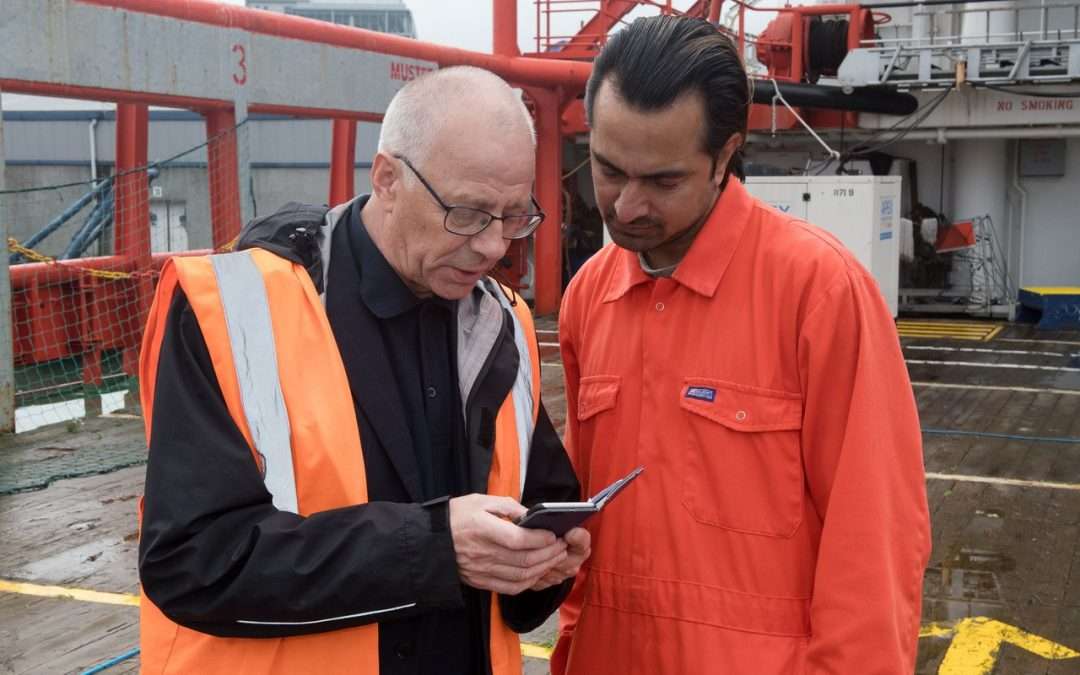 When the Evergreen container ship got stuck in the Suez Canal last year, it was carrying 18,300 containers, but it only had a crew of twenty-five on board. While ships like this mean that goods can be delivered more quickly and cheaply than ever before, for seafarers there is less time for rest, more stress, and often a sense of isolation.

Stella Maris port chaplains, such as Wojciech Holub, who covers Tilbury and London Gateway in Essex, see at first hand the effects of the modernisation of shipping.  Nowadays, modern ports are very far from town and cities, where at one time seafarers could spend time ashore.

“I know that many seafarers who have a few hours rest can’t be bothered leaving the seafarers welfare centre at the London Gateway terminal, as it involves going through tight security checks which take about an hour to get out and the same time to get back in.  So, they decide to remain on board.”

Huge container ships like the Evergreen carry everything from computers and clothes to parts for cars and food. We might be more familiar with airports than ports, but around 90% of goods imported to the UK arrive by ship.  The seafarers on board are likely to be from the Philippines, India, or Eastern Europe.

Quick turnarounds, explains Wojciech, mean ships visiting more ports, more moorings and lashings (securing cargoes), and more paperwork. Seafarers have little time to relax.  “What matters most is the maximum cargo to be shifted around the globe making maximum profit for the owners. Seafarers’ welfare is yet to catch up,” he says.

There is a growing awareness in the maritime industry of the mental health of seafarers. Being away from their families for up to nine months, having little shore leave, and sometimes dealing with bullying or racism on board can place an enormous strain on some seafarers, who do what is, arguably, one of the toughest jobs in the world.

Wojciech has helped to repatriate some seafarers who felt unable to cope anymore with the situation on board. “Often too much and prolonged pressure on board leads seafarers to suffer silently and complete their contract because they don’t want to return home with the stigma of being mentally weak.”

Seafarers rely on the internet to keep in touch with their families back home. However, not all vessels have an internet connection and with those that do, access to the crew is sometimes restricted.

Yet even when seafarers have access to the internet they can still feel isolated when issues come up at home, says Rev Doug Duncan, Stella Maris port chaplain in Aberdeen. “I had a recent example of a Russian captain whose house was flooded, and his wife had to deal with it. He was being bombarded with photos of the devastation and was unable to help. He was trying to arrange with his company a replacement to allow him to return. He felt helpless being stuck in Scotland while this was happening back home.”

Stella Maris port chaplains and volunteer ship visitors are a lifeline to seafarers when they arrive in a port.  Amongst other things, they provide sim cards, mobile WiFi units, woolly hats, and transport to local shops or medical centres.

Anne McLaren, Stella Maris port chaplain in Hull, explained that seafarers’ centres play an important role. “The Hull Seafarers’ Centre can provide a quiet space for seafarers to unwind and to create a ‘home from home’ where they can relax away from the noise and bustle of their vessel as being onboard the same for many months at a time can be stressful. As the centre provides free WiFi they can contact their families back home which is especially important for them to maintain that contact and they can speak to a chaplain or volunteer if they wish.”

When social restrictions were in place during the Covid pandemic, Stella Maris chaplains could only communicate with seafarers from the gangway or though social media.  Doug says he found this frustrating. “There is no better way than sitting and listening to seafarers tell you about their lives. Some seafarers portray a happy disposition, but it is only when you sit and chat with them, away from the mess room, that they will open up.”

A high percentage of seafarers are Catholic, and one of the tasks of port chaplains is to help them feel part of the Church, especially at times such as in Lent and at Easter.  Last year, Doug arranged for seafarers to go to confession. “Some seafarers had requested confession before Easter and contacted me to see if this could be arranged. Their vessel on arriving in Aberdeen was required to go back out to another location in the North Sea within two days. I contacted the local priest, Fr Gábor at St Peter’s Church, who was delighted to help. And so my Stella Maris car was turned into a mobile confessional box. Wearing full Covid PPE, seafarers went into the rear of the vehicle with the priest sat in the front.”

To many seafarers, faith is essential, said Doug. “Knowing and believing someone is by their side in all situations gives them some comfort. I hear stories of seafarers who have had to face violent storms at sea.  Even some of the seafarers who are not religious have thanked God for getting them through them.”

Anne, and her work supporting seafarers, is featured in Stella Maris’ Lent Appeal. If readers would like to donate to support the work of Stella Maris, they can do so via this link www.stellamaris.org.uk/lent