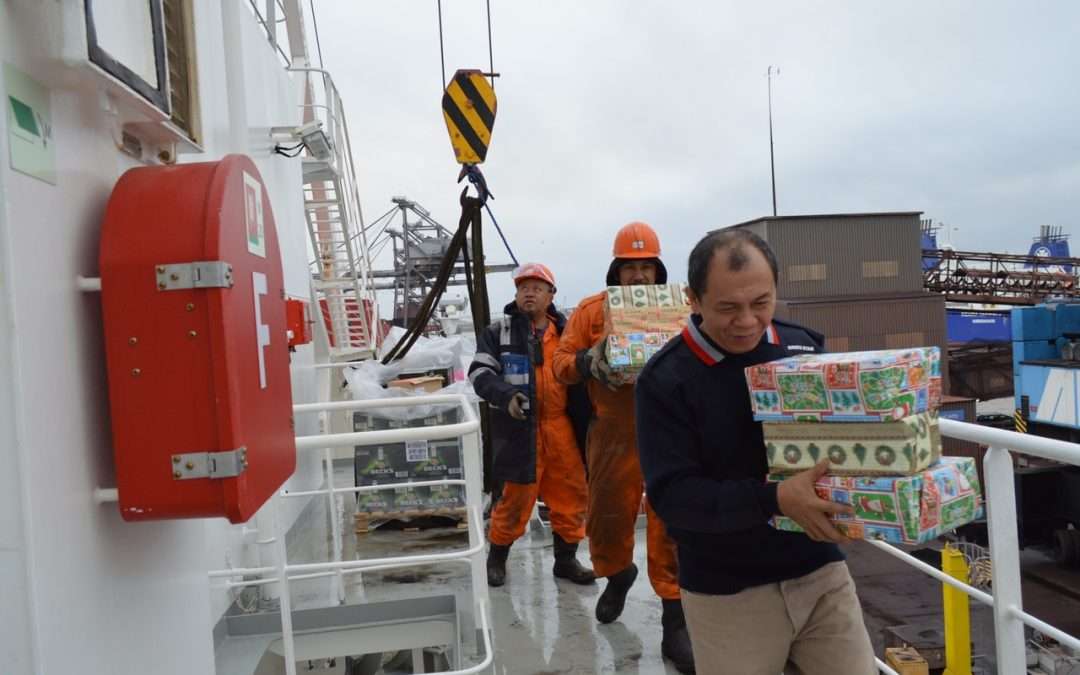 “When we go on board a ship with Christmas gifts, it makes such a difference to seafarers. Last year, one seafarer said to me, ‘Thank you for not forgetting us,’” says Peter Barrigan, Stella Maris regional port chaplain to Tees, Hartlepool and Seaham.

As Christmas approaches, many of us will be with our loved ones at this special time for families. Most seafarers will not. At best they may be in port with access to internet and mobile connections. At worst they will be at sea with no opportunity to contact their families.

Typically, seafarers spend between nine months to a year at sea, with, given the fast turnaround time of vessels, little chance to meet others during their brief stays in port. The seafarers might be invisible, but many of the items you see in your local shops have arrived in the UK by sea, as has the fuel at the petrol station and your mobile phone or computer.

Stella Maris port chaplains like Peter, and his team of volunteer ship visitors, are often a lifeline to seafarers, providing, amongst other things, transport to local shops, mobile WiFi devices, warm clothing, and arranging medical appointments.

At Christmas, said Peter, one of the most important things is to enable seafarers to contact their families.  “We make sure that they have SIM cards and mobile phone top-up vouchers.  We are aware of the sadness that being away from families can bring at this time of year and so we try and spend more time on ships.”

When Peter takes Christmas gifts on board, he dresses up as Santa Claus.  Seafarers will often take photos of him to send back to their families.  Last year, he and his team distributed around 800 shoe boxes or bags wrapped in Christmas paper.  These were provided by local parishes and schools and contained items such as toiletries, socks, woolly hats, and chocolate.

“There’s often a card inside with a simple message written by a child, saying something like ‘Thank you for all you do for us.”  On one ship last year, an officer went to his cabin and returned with the card he’d received the previous year, telling me that it had meant so much to him that he had kept it by his bed.

“We tend to have an impromptu sing along when we take the gifts on board. As we gather in the mess rooms, we start singing Christmas songs to which the guys join in. It’s just a few verses, but it brings smiles to their faces.”

“Last Christmas, many seafarers were not able or unwilling to go ashore or have guests aboard ship because of Covid concerns,” says Gregory Hogan, Stella Maris regional port chaplain in Southampton.  “Our outreach was limited to dropping Christmas packages at the gangway.  This year, most ships have returned to normal operations and crew can go ashore when there is time.  We can see that crew feel a lot happier this year.

“On each ship I visit, I say a brief prayer for the crew and their families, asking God to bless and protect them. A lot of seafarers are Christian or of other faiths, and they appreciate this.”

Whether in port or at sea, seafarers always try to celebrate Christmas on board ship, explains John Pinhay, Stella Maris chaplain to the ports of Falmouth and Fowey in Cornwall. “The Filipino crews will normally eat pork, instead of our traditional turkey.  I recall the Filipino crew on one vessel explaining that, as they eat their Christmas lunch, they watch a biblical film, like Jesus of Nazareth. Most ships put up decorations and a tree. When we take the Christmas parcels on board, we encourage the crew not to open them until Christmas Day itself and to put them under the tree.”

Unlike Stella Maris port chaplains, we are unlikely to meet any seafarers over Christmas. Yet it’s only because of the tough job that they do that we can buy many of those things that help make Christmas such a special time.

To find out more about Stella Maris’ work or to make a donation go to www.stellamaris.org.uk.