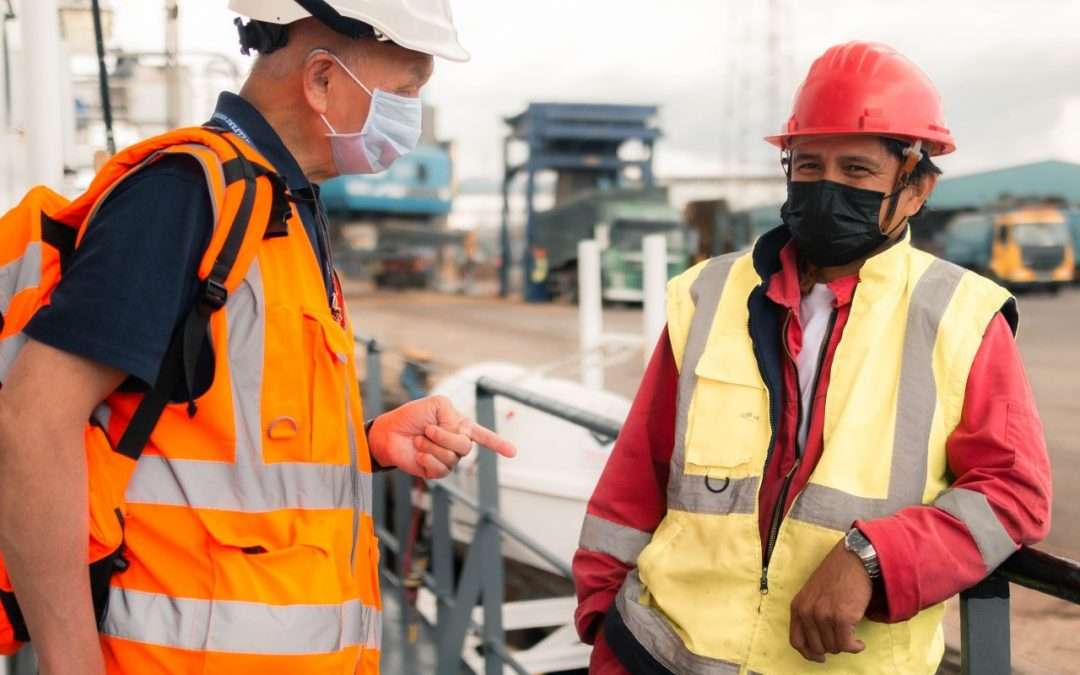 “I was chatting to a seafarer on a ship in Ipswich being loaded with barley, and within minutes of going on board, I was covered in dust.  I momentarily took off my sunglasses to put on my reading glasses and the dust immediately got into my eyes. The seafarer was not wearing any eye protection,” says Julian Wong, Stella Maris East Anglia and Haven Ports regional port chaplain.

Julian is a regular visitor to the grain terminal at Ipswich, threading his way around the 15 silos and seven warehouses that store, apart from barley, milling wheat, oats, oilseed rape and other agricultural products.  Most of the grain that is exported comes from farms in Norfolk, Suffolk, Essex, and Cambridgeshire, the area known as “the breadbasket of England.”

Understandably, there’s been much discussion recently about the shortage of HGV drivers and empty shelves in supermarkets. But seafarers play an equally vital role in the food chain, moving products from one country to another.  While we can see trucks on our roads, seafarers are an invisible workforce.

“Even at harvest time, when we traditionally think about all the food that is grown to feed us, seafarers are overlooked. Without them, we would not have much of what we eat, particularly from abroad,” notes Julian.

As a port chaplain, Julian is there to offer whatever help he can to the seafarers he meets. This might be practical, such as providing woolly hats or a MiFi (mobile WiFi) unit to enable them to use the internet to contact their families back home (many seafarers have no internet access at sea). It might be pastoral help such as providing a listening ear if someone is feeling homesick, is worried about a member of their family, or hasn’t been paid.

“When I visit grain ships, the seafarers always seem to be on deck working and I have little opportunity to have a proper conversation with them,” says Julian. “The size of the crew is quite small, on average about seven, including the captain and the cook. On other types of vessels, there is always someone on deck duty and it is usually possible to get information from that seafarer and have a chat.

“The grain ships have very limited space on board,” he explained. “The mess room is shared between officers and the rest of the crew, so there is little privacy and junior seafarers may be reluctant to say anything that their officers may not like to be shared.

Often seafarers, when off duty, are so tired out that they retire to their cabins to rest. It is therefore sometimes difficult to be able to fully assess the situation on board and how the seafarers are feeling.”

Most seafarers he meets come from the Philippines, Poland, Russia, and Ukraine. Typically, they will be at sea for nine months, which means they see little of their families. Life at sea is dangerous and tough, but most seafarers choose it because it provides the best way for them to support their families financially.

Nowadays, ships are not in port for long and while they are, because crews are so small, there is always work to do on board. Some seafarers are so busy that they don’t have time to go ashore to do their shopping or to send money home to their families.

Julian, a former psychiatric nurse, loves his work as a port chaplain and sees it as a way to live out his Catholic faith. “I am on the front line. I see people whom members of the general public do not see. I hear seafarers’ stories and share their ups and downs. It is hard when you hear that, because they have been at sea, they have missed the birth of their child, the death of one of their parents, or the opportunity to visit a family member who is seriously ill.”

The seafarers he encounters are always appreciative and thankful for Stella Maris (formerly called Apostleship of the Sea) and the little things he does for them, he says.  “Before the pandemic, they shared their meals with me in the mess room and we were like a family. Stella Maris has provided support to seafarers in the Mediterranean and in the Pacific Ocean using social media. We have always told them that they can contact us for help whenever they need to.

Julian, and his work with grain ship crews, is featured in Stella Maris’ Harvest Appeal. If readers would like to donate to support the work of Stella Maris, they can do so via this link www.stellamaris.org.uk/harvest