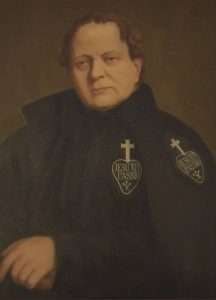 The Road to Sainthood For Northamptonshire Priest

Pope Francis has declared that a nineteenth century priest, who grew up in a Northamptonshire village is to be known as Venerable Ignatius Spencer, the Vatican has announced.

If the name Spencer sounds familiar, it may be because Ignatius’ great, great, great niece is known to the world as Princess Diana.

Born in London as George Spencer on 21st December 1799, he went to live at the Northamptonshire stately home of this prominent, aristocratic family.

In his Anglican parish of Althorp, where he was ordained a priest in 1824, he worked tirelessly for the local community. He had a special care for the poor and those on the fringes of society.

Ignatius turned his back on the family’s great wealth to convert to Catholicism in 1830 and joined the Passionist order and was ordained a priest in 1832.

He died in 1864 of a heart attack whilst walking in Scotland. He worked tirelessly throughout his life for church unity. He is buried in the church of St Anne’s, Sutton, St Helens, Merseyside.

Althorp is still owned by the Spencer family with Princess Diana’s brother, Charles in residence at there today. The home is now the resting of the former wife of Prince Charles.