"Do not be afraid of the supernatural. It makes sense of everything" +David Contact Vocations TeamPriest Vicariate

What is a vocation?

The word ‘vocation’ comes from the Latin verb vocare, which means ‘to call’.  Every person is called to come to know God’s unconditional love for them.  For those of us who are baptised, we have already become adopted sons and daughters of God in Christ Jesus.  All of the baptised share in what is called the ‘baptismal priesthood’, where we come to know the love that God has for us personally as members of God’s family, and seek to share that love with others as we follow Jesus faithfully as his disciples and allow him to transform our lives.

Saint Augustine (354-430AD), a Catholic bishop and theologian, said that our hearts are restless until they rest in God.  At the heart of every vocation is what Jesus describes as living life to the full (see John 10:10).  The Lord knows the deepest desires of every human heart, and so knows how we can become truly ourselves and truly fulfilled in God.

Every person should therefore ask the question, “What is God calling me to do?”

What different types of vocation are there?

Building upon our baptismal priesthood, we are then called by God to live out our Christian lives in more specific ways.  There are several states of life officially recognised by the Church as being particular ways in which Christians are called to serve God and neighbour.  For more information on single, married, religious and consecrated life, please see the National Office for Vocation website which can be found at https://www.ukvocation.org/.

One of the states of life to which God calls men to is the ordained ministry.  Through the Sacrament of Holy Orders, men become deacons, ministerial priests, and bishops.  For more information on the diaconate, please visit [website page].  The remainder of this section will be focused on the ministerial 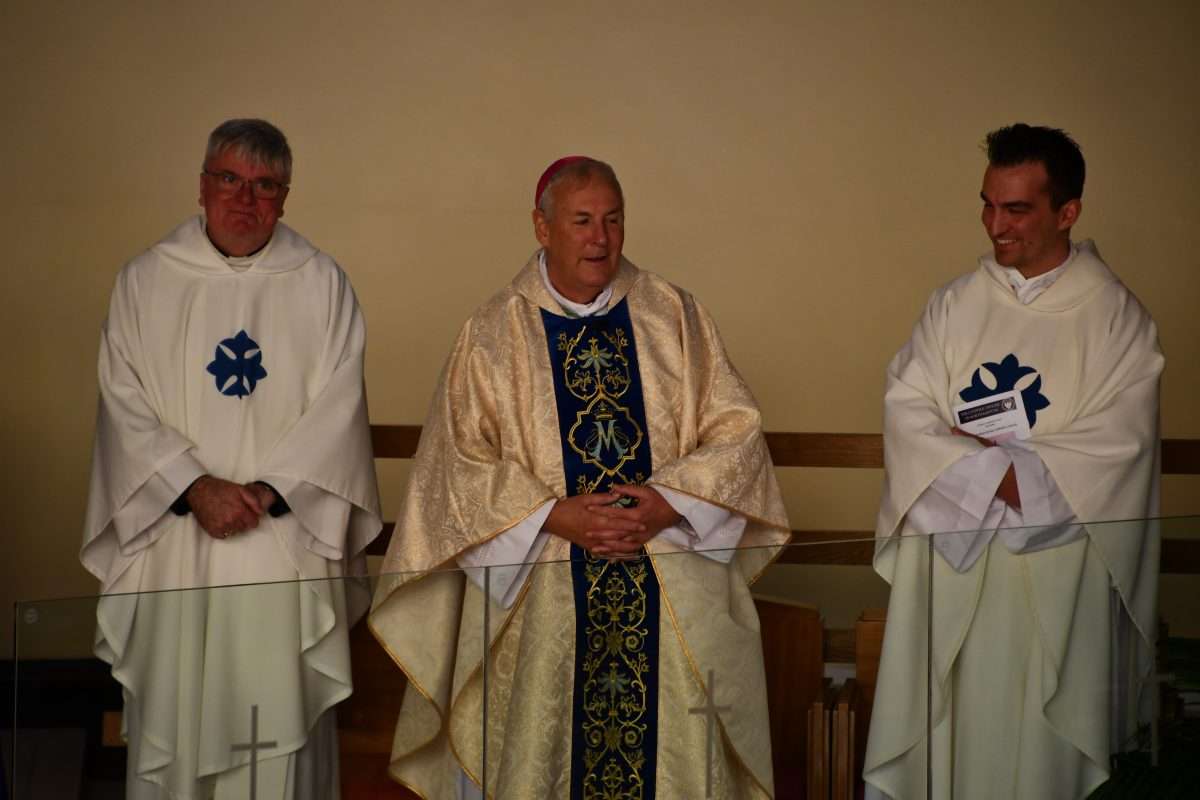 What is the Catholic priesthood?

All priesthood in the Church is a sharing in the one priesthood of Jesus Christ.  Ministerial priests are called to share in the priesthood of Christ the Head and Shepherd of the Church.  A man does not choose priesthood for himself, rather he cooperates in God’s call upon his life to this ministry: ‘No one takes this honour upon himself but each one is called by God’ (Hebrews 5:4).

A priest’s life is centred upon the Sacraments and upon the Holy Eucharist, where above all Jesus is present.  People will also meet Christ the Good Shepherd in everything that a priest does for them and simply by his presence with them.

What’s the difference between a ‘religious’ priest and a ‘diocesan’ priest?

A religious priest is someone who has trained for and been ordained a priest for a religious order, of which there are many.  Religious orders tend to have been founded by a particular person, during a particular time, for a particular reason.  As such, they have different gifts or charisms, and therefore different functions and ways of living.  Religious priests take vows of poverty, chastity and obedience, and often live in community.  For more information on the religious life see https://www.ukvocation.org/religious.

A diocesan priest is someone who has trained for and been ordained a priest for a particular diocese.  As such, a diocesan priest is more geographically fixed than a religious priest, and usually ministers within the diocese for which he has been ordained.  At his ordination, he promises respect and obedience towards his diocesan bishop and his successors.

Why become a Catholic diocesan priest?

Men of all different ages can be drawn to the diocesan priesthood for many different reasons.  Some may have been altar servers when they were young and had a desire then that they hoped to become a priest one day.  Others may have known a priest who had inspired them by their words, or through whom they had encountered Christ ministering God’s love and mercy to them or to their loved ones at key moments in their life.  Some may have experienced God when receiving the Sacraments, and felt a desire to celebrate the Sacraments themselves so that others may experience God’s presence.  Others may know the power of God’s Word in their lives, and have a desire to preach this to others.  It could be that some do not know why exactly they feel drawn to the priesthood, but that somehow they have a sense that God may be calling them to this way of life, and that they are restless until they have at least explored the possibility.  Others may have been drawn through a combination of these reasons, and some may have many other reasons too.

Key to a vocation to the priesthood is the faithful living out one’s personal relationship with God and putting that first above all else, a love for Jesus and for his people, an inner sense that God may be calling one to the priesthood, and a desire to lay one’s life down in order to serve others and allow the Risen Christ to minister to others through them.

Every Catholic man should ask the question, “Is God be calling me to be a priest?”

Are Catholic priests allowed to marry?

All bishops in the Catholic Church live celibate lives.

It is also the practice for priests in the Latin rite of the Catholic Church (most commonly found in Western Europe and those places evangelised by Europeans) to remain celibate.

In the Eastern rites of the Catholic Church (found in Eastern Europe and the Middle East), married men can be ordained to the priesthood.

In recent years, the Latin rite has extended this Eastern custom of ordaining married men to former ministers of other denominations who have become Catholic.

No part of the Catholic Church, however, allows a man to get married after having received the Sacrament of Holy Orders.  So, for example, a man of the Eastern rite who married before being ordained would not be allowed to remarry should his wife die once he has been ordained a priest.

All ordained ministers of the Catholic Church are thus in a stable state of life so that bishops, priests and deacons can build stable, pastoral relationships with the people they serve.

Bishops and priests who live celibate lives do so in order to imitate Jesus who himself lived as a celibate so as to give his life completely for his flock.  Celibacy is also a prophetic sign of the life of heaven to come, where the only marriage will be that of Christ to his Church.

Because a priest imitates Christ the Good Shepherd, he is asked to lay down his whole life out of love for God and for his flock.

In the Latin rite, he therefore makes three particular promises at his ordination: to live a celibate life; to obey and respect his bishop; to live a simple life.

What do Catholic diocesan priests do?

Diocesan priests are co-workers with their bishop and are usually based in parishes within their own diocese.

They are first and foremost called to preach the Word of God, to live by it themselves, and to encourage others to put the Lord’s teaching into practice in their own lives.  In order to do this effectively, they must be men of prayer.

They administer the sacraments of the Church, such as baptism, celebrating Mass and administering Holy Communion, hearing confessions, visiting and anointing the sick at home or in hospital, and conducting marriages and funerals.

Much of a priest’s time is spent preparing for his ministerial activities.  So, for example, time is needed to prepare homilies for Mass, to meet with bereaved families to plan funerals for their loved ones, to provide instruction for couples preparing for marriage, and to help prepare children and young people to receive their First Holy Communion and the sacrament of Confirmation.

Priests spend time meeting with people for many other reasons too, such as, for example, in order to listen to their concerns and worries, to pray with them, and to seek to offer helpful advice when needed.

At times, priests may go into schools to hear confessions, celebrate Mass and speak to classes.

Some priests may be asked to take on roles such as being a chaplain to a school, a hospital, a prison, or even to the police or armed forces.

Who can become a Catholic diocesan priest?

Anyone born a male, who has received the Catholic sacraments of Baptism, Confirmation and Holy Communion (or who has been fully received into the Catholic Church), is now over the age of 18, and has never been validly married (or if they have been validly married is now widowed), is eligible to be at least considered as a possible candidate for the diocesan priesthood.

How can I become a Catholic diocesan priest?

As the diocesan priesthood mostly involves serving in parishes, a good start for a man considering the priesthood would be that he already lives his faith in a parish context within the diocese he is considering being a priest for.  In this way, he will already be known by parishioners there and by his parish priest.

As all priesthood is a sharing in the one priesthood of Christ, it is important that a potential candidate for the priesthood is already living a faithful life of discipleship, and is seeking to nourish his personal relationship with God through prayer, through the reading of the Scriptures, and through other spiritual devotions that help him to grow in imitation of Jesus.

As a priest is called to lay down his life for Christ’s flock, a man considering the priesthood should seek ways to serve others.

As diocesan priests promise to live celibate lives, a man considering the priesthood should seek to also live as a celibate.  The current requirement is that a man has lived as a celibate for at least two years before beginning priestly training.

If a man is considering being a priest, a first step may be to speak with his parish priest about this.  As his pastor, his parish priest will hopefully be able to guide and advise him, and if he thinks appropriate, to encourage him to contact the diocesan vocations director.

The vocations director runs vocations days several times a year, and if deemed appropriate by him and the local vocations guide, the man considering the priesthood will be invited to attend these.

After a period of discernment, the vocations director may invite the individual to make a formal application to the diocese to train as a priest.